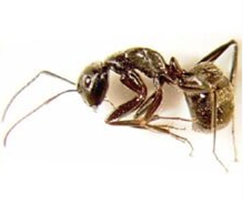 Carpenter ants are large (.25 to 1 in/0.64 to 2.5 cm) ants indigenous to many parts of the world. They prefer dead, damp wood in which to build nests. They do not consume it, however, unlike termites. Sometimes carpenter ants will hollow out sections of trees. The most likely species to be infesting a house in the United States is the black carpenter ant (Camponotus pennsylvanicus). However, there are over a thousand other species in the genus Camponotus.

Carpenter ant species reside both outdoors and indoors in moist, decaying or hollow wood. They cut “galleries” into the wood grain to provide passageways for movement from section to section of the nest. Certain parts of a house, such as around and under windows, roof eaves, decks and porches, are more likely to be infested by Carpenter Ants because these areas are most vulnerable to moisture.

Carpenter ants can damage wood used in the construction of buildings. They can leave behind a sawdust-like material called frass that provides clues to their nesting location. Carpenter ant galleries are smooth and very different from termite-damaged areas, which have mud packed into the hollowed-out areas.

Control involves application of insecticides in various forms including dusts and liquids. The dusts are injected directly into galleries and voids where the carpenter ants are living. The liquids are applied in areas where foraging ants are likely to pick the material up and spread the poison to the colony upon returning.