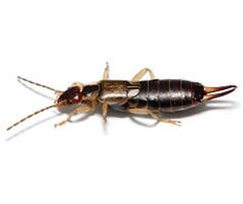 Earwigs are a relatively small group of insect that belong to the Order Dermaptera. Earwigs often upset people when discovered indoors. Their forcep-like tail appendages make them look dangerous, but they are quite harmless. Earwigs run rapidly around baseboards, and they may emit a foul‑smelling, yellowish‑brown liquid from their scent glands when disturbed or crushed. Earwigs are mainly active at night, usually hiding during the daytime. They’re often found in clusters hiding in dark crevices like door or window frames. Earwigs normally live outdoors and do not establish themselves indoors, though the ringlegged earwig is a common resident in greenhouses. Earwigs are harmless to humans and animals, though if picked up and restrained, adult earwigs can give a slight pinch with the forceps. While mainly predaceous on other insects, earwigs often feed on flower petals, soft vegetables and fruits, or seedling plants when hot and dry conditions persist.The name earwig actually comes from an Old English name, ēarewicga (meaning “ear insect”), which was derived from the superstition that earwigs can enter your ears at night and burrow into your brain to lay eggs. This belief is totally unfounded, though earwigs will occasionally seek out ear canals of campers as dark, moist hiding places. This can obviously be a traumatic experience!

Adults of the European earwig are usually winged, while the ringlegged earwigs are wingless. If wings are present, the first pair are hard, short, and scale-like, while the second pair are membranous, fan‑shaped, and folded under the hard first pair of wings. Tips of the second pair of wings usually protrude from under the first pair. The European earwig ranges from 1/2 to 3/4 inch long, with banded legs and a reddish head. The ringlegged earwig ranges from 1/2 to 3/5 inch long and is black‑yellowish underneath with legs having white crossbands at the joints.Young earwigs (nymphs) are similar to adults except that the nymphs lack wings and the cerci are short.