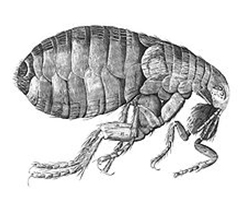 Fleas (Order: Siphonaptera) are very common pests on domestic dogs and cats, especially during the warm months of July through October, but fleas may persist all year indoors. It is estimated that pet owners alone spend over $1 billion each year controlling these ectoparasites. There are over 2,000 described species of fleas worldwide, however the most common flea encountered in and around homes is the cat flea. The dog flea, while very similar to the cat flea, is relatively rare in North America. Most dogs infested with fleas have cat fleas! Adult fleas are not only a nuisance to humans and their pets, but can cause medical problems including flea allergy dermatitis (FAD), transmission of tapeworms, secondary skin irritations, and, in extreme cases, anemia.

Although bites are often felt as a sharp pricking sensation, it is the resulting irritation caused by flea salivary secretions that varies among individuals. Some may experience a severe reaction (general rash or inflammation) that results in secondary infections caused by scratching the irritated skin area. Others may show no reaction after repeated bites over several weeks or months. Bites on humans are usually found on the ankles and legs. The typical reaction to the bite is the formation of a small, hard, red, slightly raised (swollen) itching spot, surrounded by a red halo. Flea bites on sleeping people typically occur in clusters or lines of two or more bites. On pets, fleas tend to concentrate their bites to the neck, shoulder blades, and base of the tail regions. However, with heavy infestations, the fleas can be seen running across the sparse hair areas of the belly. While rare in North America, fleas are known to transmit bubonic plague from rodent to rodent and from rodents to humans. Oriental rat fleas can transmit Murine typhus (endemic typhus). Tapeworms use fleas as intermediate hosts to infest dogs and cats. The flea larvae may consume tapeworm eggs, the eggs develop into a larva that incysts in the fleamuscles, and if an infested flea is eaten by a cat or dog, the tapeworm completes its development in the cat or dog gut. Rarely, children can be infected with tapeworms if parts of infested fleas are accidentally consumed.

Adult fleas are approximately ⅛-inch long, dark reddish-brown, wingless, hard-bodied insects, with enlarged hind legs, and are flattened laterally (from side to side) allowing easy movement between hair, fur, or feathers on the host. Fleas are excellent jumpers, leaping vertically up to seven inches and horizontally thirteen inches. They have piercing-sucking mouthparts and spines on the body projecting backward. They also have a distinct row of spines on the face known as a genal comb. These backward-facing spines lock into hairs, which makes fleas difficult to pull out of the fur of animals.

Eggs are smooth, oval, and white, approximately (0.5 mm). The worm-like larvae are ¼-inch long (1.5–5.0 mm long), slender, translucent white, and sparsely covered with hairs. Larvae are blind and legless with chewing mouthparts. Flea larvae are typically active at night and tend to avoid light by hiding in carpet fibers, bedding, lawns or other protected areas. Pupae are enclosed in silken cocoons covered with particles of debris.