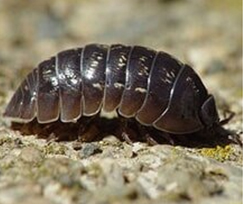 Pillbugs are more closely akin to shrimp and crayfish than to insects. They are the only crustaceans that have adapted to living their entire life on land. Pillbugs live in moist environments outdoors but occasionally end up in buildings. Although they sometimes enter in large numbers, they do not bite, sting, or transmit diseases, nor do they infest food, clothing or wood. They are simply a nuisance by their presence.

Pill bugs range in size from 1/4 to 1/2 inch long and are dark to slate gray. Their oval, segmented bodies are convex above but flat or concave underneath. They possess seven pairs of legs and two pairs of antennae (only one pair of antennae is readily visible). Sowbugs also have two tail-like appendages which project out from the rear end of the body. Pill bugs have no posterior appendages and can roll up into a tight ball when disturbed, for which they are sometimes called “roly-polies”.

Pill bugs are scavengers and feed mainly on decaying organic matter. They occasionally feed on young plants but the damage inflicted is seldom significant. Pill bugs thrive only in areas of high moisture, and tend to remain hidden under objects during the day. Around buildings they are common under mulch, compost, boards, stones, flower pots, and other items resting on damp ground. Another frequent hiding place is behind the grass edge adjoining sidewalks and foundations.

Pill bugs may leave their natural habitats at night, and crawl about over sidewalks, patios, and foundations. They often invade crawl spaces, damp basements and first floors of houses at ground level. Common points of entry into buildings include door thresholds (especially at the base of sliding glass doors), expansion joints, and through the voids of concrete block walls. Frequent sightings of these pests indoors usually means that there are large numbers breeding on the outside, close to the foundation. Since sowbugs and pill bugs require moisture, they do not survive indoors for more than a few days unless there are very moist or damp conditions.