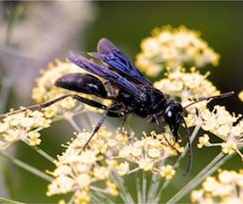 Paper wasps and hornets may become a nuisance when nesting around homes and other structures where people live, work or play. Although considered beneficial to agriculture, (since northern or paper wasps feed abundantly on corn earworms, armyworms, tobacco hornworms, etc. and hornets on house flies, blow flies, harmful caterpillars, etc.), it is their painful stinging ability that causes alarm and fear. Nevertheless, unless the threat of stings and nest location present a hazard, it is often best to wait for Mother Nature to kill these annual colonies with freezing temperatures in late November and December. Stinging workers do not survive the winter, and the same nest usually is not reused the following year, except by the yellow and black dominulus paper wasp, on occasion.

The northern or paper wasp is about 3/4 to 1-inch long, slender, narrow waisted with long legs and reddish-orange to dark brown or black in color. There are yellowish markings on the abdomen (rear body part). Paper-like nests, shaped like tiny umbrellas, are suspended by a short stem attached to eaves, window frames, porch ceilings, attic rafters, etc. Each nest consists of a horizontal layer or “tier” of circular comb of hexagonal (six-sided) cells not enclosed by a paper-like envelope. The ends of the cells are open with the heads of the larvae exposed to view.

New to Ohio in 1991, the dominulus paper wasp is somewhat smaller than our native northern paper wasp. It is black with bright, yellow stripes and spots resembling yellowjacket wasps in color.

Baldfaced hornets are up to 3/4-inch long with black and ivory white markings on the face, thorax (middle body part) and tip of the abdomen. Paper-like nests are grayish-brown, inverted, pear-shaped up to three feet tall with the nest entrance at the bottom. Each nest consists of a number of horizontal layers, stories or “tiers” of circular combs, one below the other completely enclosed by a paper-like envelope as a covering. Also, the cells are not exposed to view.

Paper wasps and hornets are social insects, living in colonies containing workers, queens and males. Colonies are annual with only inseminated queens overwintering. Fertilized queens occur in protected places such as houses and other structures, hollow logs, in stumps, under bark, in leaf litter, in soil cavities, etc. Queens emerge during the warm days of late April or early May, select a nest site and build a small paper nest in which eggs are laid. One egg is laid in each cell. As she adds more cells around the edge, eggs are deposited. Larvae in the center are older with the younger larvae further out. It is the cells at the rim of the nest which contain eggs. After eggs hatch, the queen feeds the young larvae. When larvae are ready to pupate, cells are covered with silk, forming little domes over the individual openings. Larvae pupate, emerging later as small, infertile females called “workers.” By mid-June, the first adult workers emerge and assume the tasks of nest expansion, foraging for food, caring for the queen and larvae and defending the colony. Remember with paper wasps, the nest is the work of a single female, has a single layer or “tier” of cells and is not enclosed by envelopes. In hornets, the nests usually consist of a number of stories or “tiers,” one below the other and completely enclosed by spherical walls. Each cell may be used for two or three successive batches of brood.

Adult food consists of nectar or other sugary solutions such as honeydew and the juices of ripe fruits. Paper wasps and hornets also feed on bits of caterpillars or flies that are caught and partially chewed before presenting to their young. Hornets may be seen almost any summer day engaged in their winged pursuit of flies.

Northern or paper wasps nest in window sills, along eaves and in open areas sheltered from the rain. It is expected that the dominulus paper wasp will become a permanent, widespread and common resident in Ohio. Reports indicate it is much more “alert to activity near its nests” than our present indigenous paper wasp species.