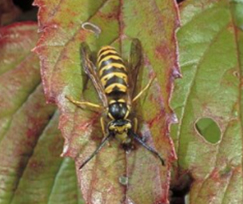 Yellowjackets (Family: Vespidae) are predatory wasps that occur throughout North America. The German yellowjacket first appeared in Ohio in 1975 and is now the dominant species in the state; the other species are natives. In the late summer (August–October), their food preferences change from proteins to sweets. At this time, yellowjackets are known to be persistent, unwelcome guests at picnics and other outdoor events, as they fly about scavenging for food, especially sugary foods and drinks. Large numbers of the wasps may be attracted to garbage cans, sweet beverages, fruit, flowery clothing, and perfume. Yellowjackets rarely cause structural damage to buildings, but they may build their nests in attic and wall voids. Their stings are painful and even dangerous if an allergic reaction
occurs.

A typical yellowjacket worker is about ½-inch long with alternating black and yellow bands on the abdomen (the black and yellow patterns on the abdomen help separate various species). Queens are visibly larger, approximately ¾-inch long. The larvae within the nests are white and grub-like. Workers are often confused with honey bees; however honey bees are covered with dense hair and have flattened hairy hind legs used to carry pollen, while yellowjackets
have hard, shiny, mostly hairless bodies. Wasps and hornets tend to fold their wings lengthwise while at rest and fly with their legs close to their bodies, while honey bees often fan their wings out slightly while feeding. Mouthparts of yellowjackets are welldeveloped for capturing and chewing insects with a tongue for sucking nectar, fruit, and other juices.

Yellowjackets are social, living in annual colonies containing workers, queens, and males (drones). Fertilized queens overwinter in hollow logs, under loose bark of dead trees, soil cavities, and other protected places. These queens emerge during the warm days of April and early May. After feeding on nectar and insects, she selects a nest site, often an abandoned mouse or rabbit burrow, but other secluded cavities work. She initially builds a small paper nest in which she deposits her eggs, individually, in brood chambers. The queen feeds the young larvae for about 18 to 20 days, which then pupate and emerge as worker-daughters that assume the tasks of the nest: gathering wood fibers to expand the nest size, foraging for food, caring of the queen and developing larvae, and colony defense. The sole duty of the queen is to lay eggs and expand the colony. Nests quickly reach a population of approximately 4,000 to 5,000 workers with 10,000 to 15,000 cells by August and late September. Adults feed primarily on items high in sugars and carbohydrates (fruits, flower nectar, and tree sap) while the larvae need proteins (insects, meats, fish, etc.). Adult workers chew and condition the captured insects or meat to feed to the larvae. Larvae in return secrete a sugary substance fed upon by the adults. The last generation produces new queens and males called drones that mate upon leaving the nest. The workers, drones, and old queen die at the onset of cold temperatures, while fertilized, new queens seek protected places to overwinter. Abandoned nests typically decompose and disintegrate during the winter or are occasionally reused by another queen.

Nests are typically built in animal burrows, cavities formed in thick mulch piles, or other protected cavities such as rotted tree trunks, wall voids, and ceilings. Nests are constructed entirely of wood fiber mixed with wasp saliva and are completely enclosed, except for a small opening at the bottom. The nest contains many tiers of combs, sometimes 10 or more. Nests built in the open are usually constructed by bald-faced or yellow hornets, which have similar life cycles and habits of yellowjackets.